The Museum of the American Military Family & Learning Center joins DoDEA and many other organizations in wishing Ms. Baker a wonderful birthday. 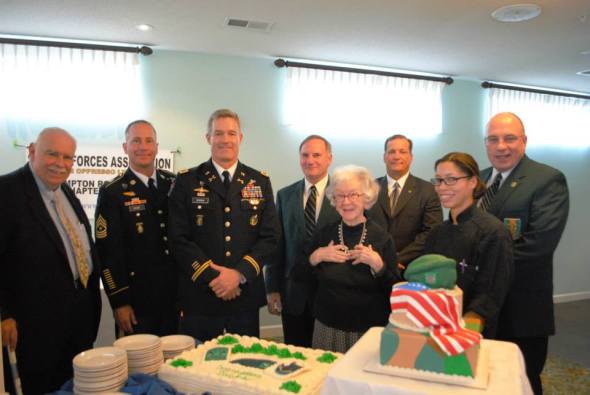 Ms. Baker was a Department of Defense (DOD) civilian employee whose dedication to her students, fellow educators, the Bad Toelz soldiers and their families was outstanding. Ms. Baker began her overseas teaching career in Germany where, from 1950 to 1979, she served the DoD with great distinction as a teacher and principal of the U.S. Army Elementary and Junior High Schools in Flint Kaserne, Bad Toelz, Germany, the first overseas assignment base for the 1/10th Special Forces Group Airborne (Green Berets).

Her outreach, mentorship, counseling and friendship to students, parents, the command, and the entire Army community benefitted thousands who passed through the gates of Flint Kaserne. For more than 30 years, Doris adopted the Green Berets as her own, calling them “her lads.”

Ms. Baker authored  “The Originals” — the first book about the Green Berets written by a woman — which chronicles an American woman caught in the dangerous lives and fortunes of these extraordinary men. Her extensive travels and freelance photography assignments after World War II were blended into her book, “I’ll Let You Know When We Get There.”

Miss Baker’s legacy of service and adventure inspires all who have been touched by her and her work, and continues to live on through the lives of her students, colleagues and friends — who she continues to influence around the world.

Her long-time friend, H.C. “Woody” Woodward says,“Birthday cards and messages from each of you will mean so much to this outstanding woman that supported A/10th SFG at Flint Kaserne in Bad Toelz, Germany from 1953-1980”.

This site uses Akismet to reduce spam. Learn how your comment data is processed.

The Museum of the American Military Family

546B State Highway 333
Tijeras, NM 87059
505 504-6830
The museum will be open Friday and Saturday mornings 8:30 am till noon and by appointment to groups with fewer than 10 individuals.
Please call (505) 400-3849 24 hours in advance to schedule a visit on days other than Friday/Saturday. We have a suggested donation of $3.00 per person admission. We appreciate your understanding and look forward to your visit. If you prefer to visit us “virtually” please check out our stories and video podcasts at

We have created a “Wish List” on Amazon. We have a lot of little things we wish we could have. If you’d like to buy us something from the list, we’d really appreciate it.

Please consider donating to us!

Each Time You Shop, You Help!

The Museum of the American Family (NonProfit # IA946) is a Smith's Inspiring Rewards Member--If you shop Smith's or Affiliate, please click the icon to register online